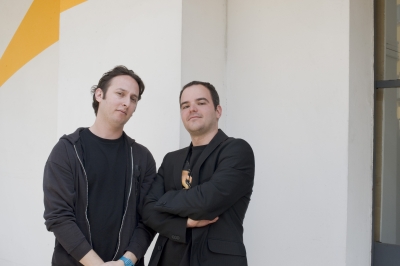 For Design Miami/ Basel, Zigelbaum & Coelho will create “Six-Forty by Four-Eighty,” an interactive installation of thousands of graspable, luminescent pixels controlled by remote light brushes. The project blurs the boundaries between the digital and the physical while presenting a new solution for controllable, ambient lighting for interior spaces. W Hotels sees a fit between this project and the brand’s ‘Living Room’ approach to lobby areas, in which people are encouraged to hang out, socialize and enjoy their surroundings. “Primed by the biases of our visual culture, the pixel has ascended as the digital realm's primary ambassador, but it has been a deceitful emissary,” says Jaime Zigelbaum. “By transposing the pixel from the confines of the screen and into the physical world, focus is drawn to the materiality of computation itself, and new forms for design emerge from the exposed spaces between media.” Marcelo Coelho adds, “Our participation means that we, the bastard children of art, design, engineering, and human-computer interaction, are invited into the family home. And just in time to get to work. Computational material is new again.”

Zigelbaum & Coelho is a post-industrial design studio founded by Jamie Zigelbaum and Marcelo Coelho. Operating at the intersection of design, technology, science, and art, their work utilises physical, computational, and cultural materials in the service of creating new, but fundamentally human, experiences. Jamie and Marcelo began collaborating while students at the MIT Media Lab. They have lectured, published and exhibited internationally; taught classes on next generation interface design and fabrication techniques at MIT; and organised international workshops and conferences in the fields of transitive materials, reality-based interaction, and tangible interfaces. Jamie’s multidisciplinary work straddles design, human-computer interaction, media theory and cognitive science. Marcelo is an inventor of paper computers, shape-changing composites, interactive garments and digital gastronomy. His multidisciplinary Transitive Materials workshops bring together artists, designers, scientists and researchers working at the shifting boundaries between people, materials and computers. Both based in the United States, they push bits, and occasionally atoms, between Los Angeles and Cambridge.