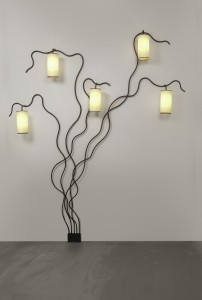 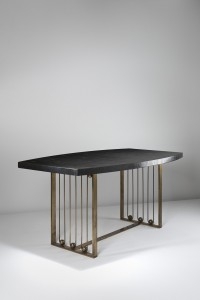 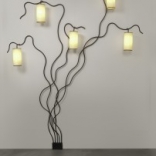 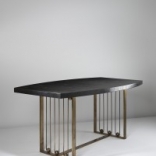 Specializing in 20th-century decorative arts, Jacques Lacoste has set out to promote French design of the 1950s. Jacques Lacoste started by opening a booth at the Serpette Market at the Flea Market in Saint Ouen in 1986. He opened his first gallery in the carré Rive Gauche in 1997 and moved to the rue de Seine in Saint-Germain des Prés in february 2008. Particularly sensitive to the work and the universe of Jean Royere, Jacques Lacoste acquired his archives in 1997 and dedicated him two exhibitions in his Parisian gallery in 1999 and 2003 and one in New York at Sonnabend Gallery in collaboration with the galerie Patrick Seguin in March 2008. In 2003 he brought his expertise to bear on the publication of a book on Royère and is now working on his catalogue raisonné. Very passionate about the 1950’s decorative arts, Jacques Lacoste exhibits lightings by Serge Mouille, sculptures by Alexandre Noll or ceramics by Georges Jouve, Elisabeth Joulia, Pierre Szekely, Valentine Schlegel and André Borderie… In February 2008, he opened his new gallery 12 rue de Seine with an exhibition of works by the French sculptor Alexandre Noll. In September 2009 the gallery organized the first retrospective exhibition on the glass maker and designer Max Ingrand and contributed to the publication of his monograph : « Max Ingrand : du verre à la lumière » by Pierre-Emmanuel Martin-Vivier (editions Norma, september 2009). In November 2009, Jacques Lacoste also held an exhibition on Yonel Lebovici in association with Cyril and Marie Grizot in his gallery. Publications : « Jean Royère », exhibition catalogue, 1999, galerie Jacques Lacoste « Jean Royère », by Pierre-Emmanuel Martin-Vivier, Editions Norma, Paris 2002 « Max Ingrand, du verre à la lumière », by Pierre-Emmanuel Martin-Vivier, Editions Norma, Paris, 2009